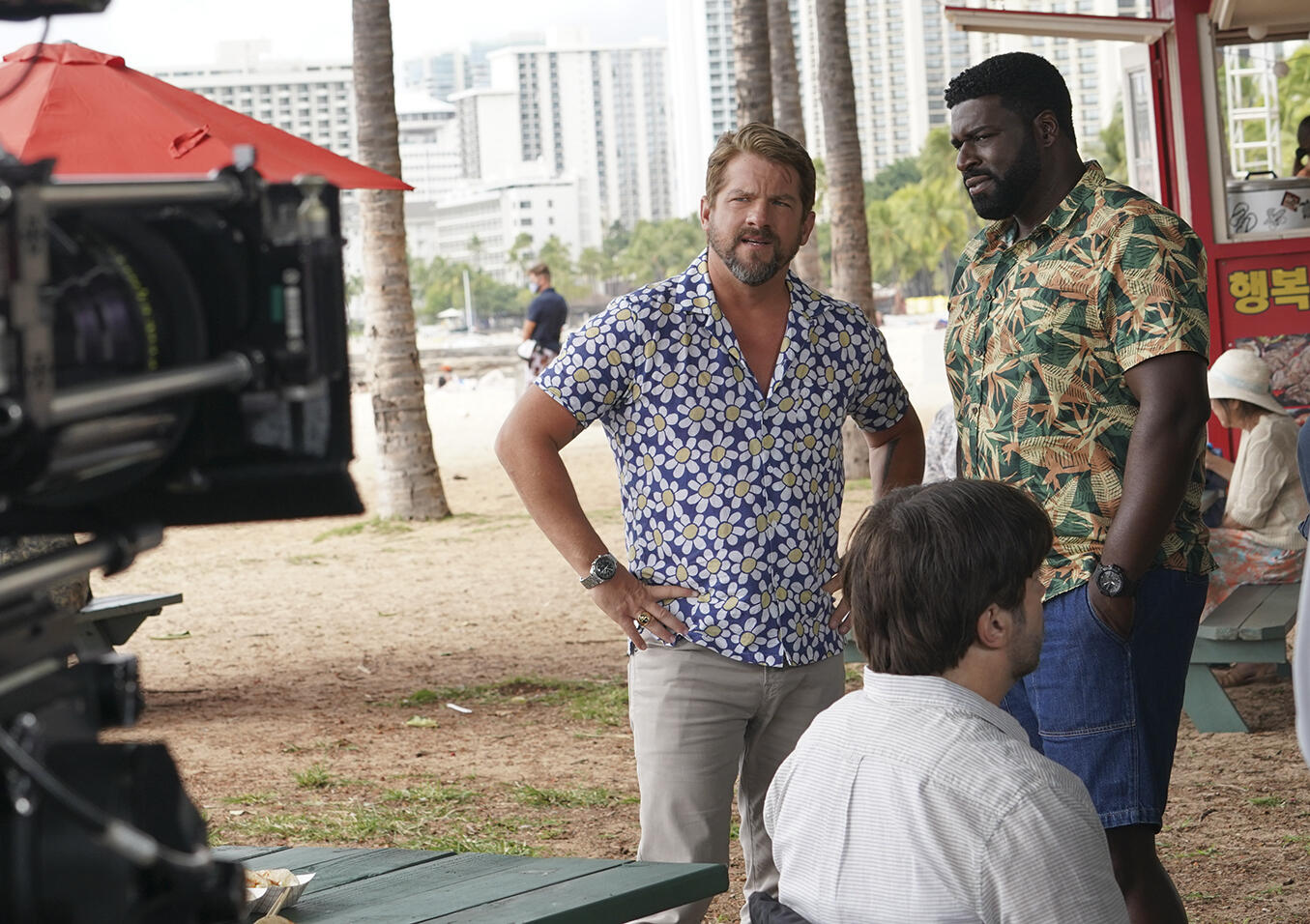 Two decades after graduating from the VCU School of the Arts, the veteran actor is living out a childhood dream. “In my 42 years on this earth I haven’t wanted to do anything else.”

Zachary Knighton is gearing up for his fourth season as nightclub owner Orville “Rick” Wright on the CBS series “Magnum P.I.,” returning in October.

A Virginia native and Virginia Commonwealth University alum, Knighton is a 20-year veteran of the entertainment industry. Before landing his role in “Magnum P.I.” in 2018, he had roles in the ABC comedy series “Happy Endings,” ABC’s science fiction series “Flashforward” and the Fox miniseries “Weird Loners,” along with a slew of episodic and recurring roles in film and television.

He points to his role in the play “Equus” during his senior year at VCU as the genesis of his career. Knighton’s portrayal of Alan Strang in the production garnered him the Irene Ryan Scholarship award, part of the Kennedy Center American College Theater Festival.

“I got to perform at the Kennedy Center and also do a showcase for a lot of big agents,” said Knighton, who graduated with a bachelor’s degree in theater from the VCU School of the Arts in 2000. “Before I left Richmond, I had signed with an agency in New York City and my career was starting. I owe so much to that play and that performance. It set everything off for me.”

The road to VCU

Knighton’s unusual path to VCU began serendipitously. He was in a band after high school and contemplated moving to New York to play music. He didn’t consider college until he performed with his band in Richmond and visited VCU’s Department of Theatre, where he met then-professors Janet Rodgers and Kenneth Campbell.

“They gave me a deadline to apply, and I did the paperwork that day. I did my monologues, and I was accepted. It seemed like a fun fit. It made a lot of sense,” Knighton said.

During his junior year, Knighton completed a semester at The Oxford School of Drama in England. His experience at VCU was “wonderful and nurturing,” he said.

“I really loved all my professors, including Liz Hopper (professor emeritus who taught costume design) and her husband, retired professor Gary Hopper (who taught acting). Dr. Campbell was one of the best teachers I ever had,” Knighton said.

Campbell, who chaired the theatre department from 1970-1983, was a mentor to Knighton and also directed one of the actor’s last performances in Richmond. He died in August 1999, shortly before Knighton graduated.

“He was quite the inspiration,” Knighton said. “After he passed and I had moved to New York, his widow sent me the book ‘The Prophet’ by Kahlil Gibran. Dr. Campbell and I had spent a long night talking about this book. It’s one of the most prized possessions I have today. It meant a lot.”

Being at VCU, Knighton said, was the “perfect gateway to my professional career. It was a transitional moment for me in my life along with getting a fantastic education from some really amazing people.”

One of Knighton’s favorite jobs during his career was his two-year stint as Dave Rose on “Happy Endings.” The cancellation of the sitcom in 2013 came as a shock. Knighton then spent a few years working on television pilots but became frustrated because he felt his career was always on hold waiting to see if the shows would be picked up.

He asked his agent to put feelers out for an action show that shot in an exotic locale and a week later the script for “Magnum P.I.” was on his desk.

“I got the offer, and it’s been fantastic ever since,” he said. “I’m sort of glued to this thing.”

The show, which is shot in Hawaii, where Knighton now lives with his family, is a modern take on a classic series that ran on CBS from 1980-88. Thomas Magnum, a decorated former Navy SEAL, upon returning home from Afghanistan becomes a private investigator.

Knighton plays Rick, a street-savvy former Marine who runs a nightclub in Oahu. In addition to his acting skills, Knighton also brings his surfing abilities to the role. He learned to surf while growing up in Virginia Beach and has been perfecting the sport ever since.

He said he differs from his on-screen character, who always seems to be in some sort of trouble.

“I’m a pretty good boy. I’m a family man,” said the father of two. “The most trouble I get in is if I don’t change a diaper.”

Knighton’s priorities have changed since he became a dad.

“Being a dad is pure love, it’s humility and learning about patience, all the things I never had to do before,” he said. “My family is my priority. When you are starting a career, you have to be devoted, and I still am, but maybe I’m softer around the edges.”

As far as acting goes, Knighton always tries to bring a little bit of himself to the character he is portraying, an important component that adds “truth” to the performance, he said.

“For Rick, they let me be loose, improvise, have fun with it, make it my own,” he said.

He’s determined not to mimic the character of Rick from the first series, a role originated by his friend Larry Manetti.

“I told Larry that I don’t want to do anything he did in the show or make the choices he made,” Knighton said.

A true Virginian at heart

Born in Northern Virginia, Knighton moved with his father to Virginia Beach when he was in middle school. He discovered his talent for acting in high school and was accepted into the Governor’s School for the Arts during his senior year at Frank W. Cox High School.

“I knew I was going to go for it and make a career out of acting,” he said. “It’s so strange. It’s been the thing I have always wanted to do since I was a kid. I wanted to entertain and make people laugh. It was a natural progression. In my 42 years on this earth I haven’t wanted to do anything else.”

His work as an actor is energizing and exciting, Knighton said.

“I get to pretend to do a lot of different things — be a doctor or lawyer, for instance — that a lot of my friends end up becoming,” he said. “I am getting to play as an adult and I like the play.”

Last year, he, like the rest of the world, watched the social unrest in Richmond unfold, much of which was centered around the Robert E. Lee monument.

“When I was in Richmond [in college at VCU] it was the first time I was really faced with racial unrest. I realized in Richmond there were tensions, and there was a lot of injustice, and it bothered me that those statues stood on Monument [Avenue]. People would be marching on Monument at the Lee statue, yelling ‘the South will rise again’ and they would raise Confederate flags. We would counter protest those guys,” he said.

A history buff, Knighton wants to see people learn from the past.

“I don’t think some things should be celebrated. When I saw what happened in Richmond [last year], it was a pretty charged moment for me but it’s not like it’s over and you can tear down the statues and all is good,” he said. “We still have a lot of work to do.”