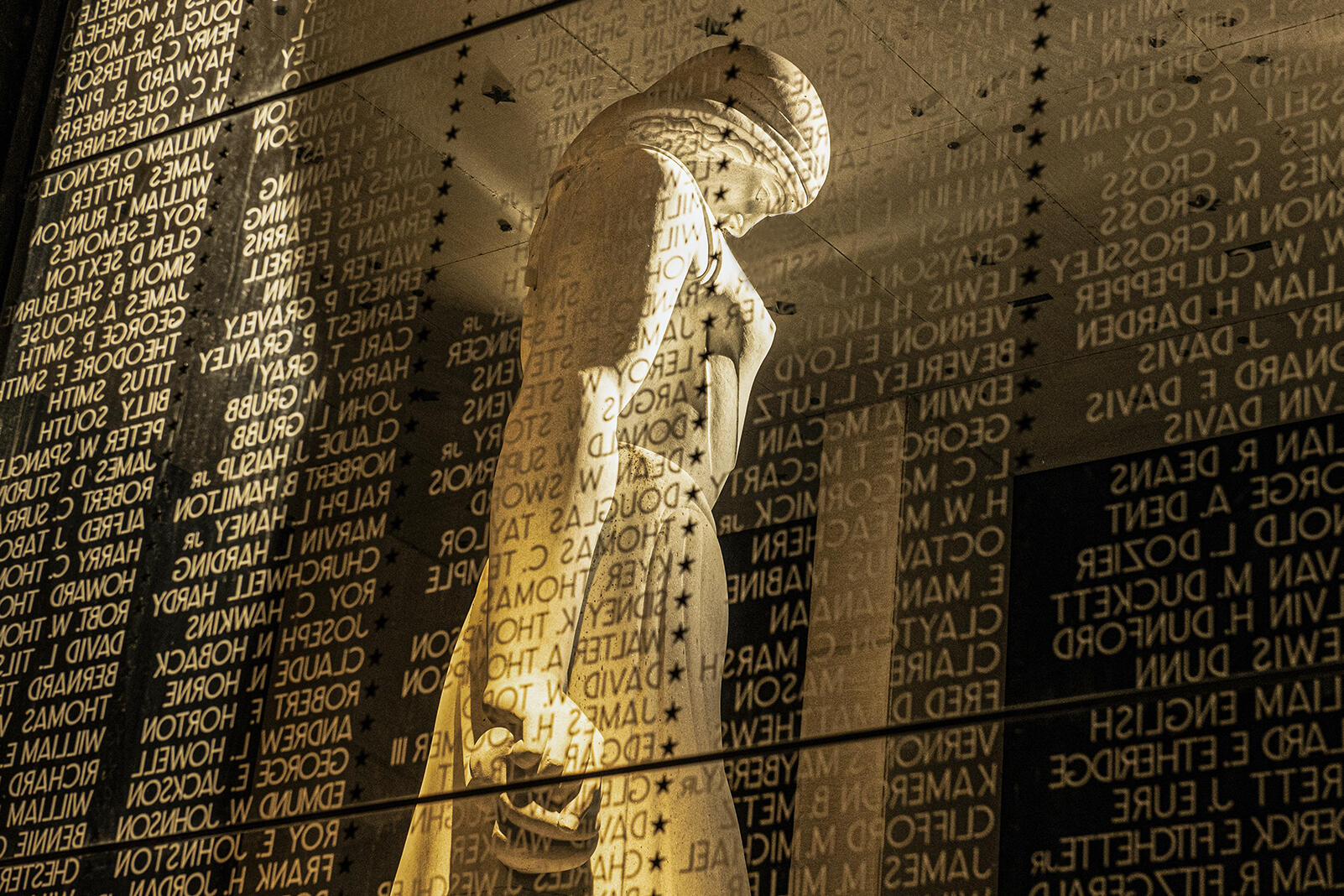 The project was done in partnership with the Virginia War Memorial as part of its work to gather information about the 1,303 Virginians listed on the memorial’s Shrine of Memory.

Walter “Butch” Boyd, a 19-year-old private first class in the U.S. Marine Corps from Norfolk, Virginia, was one of 26 Marines and sailors aboard a CH-53 helicopter that was shot down by a rocket-propelled grenade fired by Khmer Rouge forces on an island off the coast of Cambodia on May 12, 1975.

A Khmer Rouge patrol boat had seized the U.S. merchant ship SS Mayaguez and Boyd was part of the mission to rescue the vessel and its crew. The mission has been described as the last battle of the Vietnam War, occurring two weeks after the fall of Saigon.

Half of the service members aboard Boyd’s helicopter were rescued, but the remaining 13, including Boyd, were unaccounted for. For the next 20 years, Boyd would be officially listed as missing in action.

It wasn’t until 1995, when a joint U.S. and Cambodian recovery operation was launched near the vicinity of the helicopter crash, that Boyd’s remains were located and ultimately identified by a DNA sample provided by his mother.

“His remains were then transported to the United States and he was formally interred with full honors at Arlington National Cemetery on 9 June 2000,” said David Lemelin, a master’s degree in history student at Virginia Commonwealth University and a U.S. Marines reservist himself. “His mother, Marian, received the folded American flag at his ceremony. After a quarter century of missing in action, Walter Boyd had returned home and received the honor he deserved.”

Boyd was one of eight Virginians killed in the Vietnam War who were the subject of research this semester by VCU graduate students in History 611: Readings in American History, the Vietnam Era, taught by Emilie Raymond, Ph.D., a professor in the Department of History in the College of Humanities and Sciences.

Seven students, including Lemelin, as well as Raymond, presented their research Monday at the Virginia War Memorial. The projects were done in partnership with the memorial as part of its ongoing work to gather photos and biographical information about the 1,303 Virginians killed in the Vietnam War and whose names are engraved on the memorial’s Shrine of Memory.

“This research project means so much to the memorial and to the families of those who were killed in action,” said Kyndall Drumheller, research and policy manager for the Virginia War Memorial. “They say that everyone dies twice. Once with the physical death and second when people stop remembering you. What these students are doing is preventing that second death, which is so vital to our mission of educating visitors on the service and sacrifice of these heroes.”

The project is the second time — the first was in 2018 — that Raymond and her students have researched Virginians killed in the Vietnam War on behalf of the memorial, helping to bring to light their stories that can be told through future exhibits, such as the recently opened “Who They Were: Lives Worth Knowing,” which features details on 30 people whose names are on the Shrine of Memory.

The students’ research process to uncover details about the service members often starts with military records, though not enough time has elapsed for them to be fully available. They also found personal details in the Vietnam Veterans Memorial Fund Wall of Faces, FamilySearch.org, the National Archives, the Library of Virginia’s Virginia Military Dead Database, Find A Grave, Ancestry.com and many other sources.

In some cases, the students connected with family members and friends of the service members.

VCU student Jacques J. Moore Jr., who is himself a retired colonel of the U.S. Marine Corps Reserve, researched U.S. Marine Corps Lance Cpl. Cornelius Clayton Lacks, an 18-year-old from Richmond who was killed in a rocket attack near the Demilitarized Zone in Quang Ti province in October 1967.

“Cornelius was assigned to Alpha Company [1st Battalion, 9th Marines]. One of the reasons that I selected Cornelius was that he was in 1/9, a battalion that I served in, once upon a time, myself,” Moore said.

“One of the most important elements of [Lacks’] life was his sense of responsibility,” Moore said. “His mom and dad, aunts and uncles, brothers and sisters were a very large support network that were committed to making sure that everybody grew up with a strong commitment to doing what was right. And Cornelius made good on that in dramatic fashion.”

They say that everyone dies twice. Once with the physical death and second when people stop remembering you. What these students are doing is preventing that second death, which is so vital to our mission of educating visitors on the service and sacrifice of these heroes.

VCU student Angela Lehman researched Michael Lane Charles, a private first class in the U.S. Marine Corps from Bristol, Virginia, who was killed in Quang Nam province on March 3, 1968. Among many other details, Lehman found that Charles attended and played football at Douglass School, the Black school in Bristol prior to integration, and that he likely then was among the first students to go on to attend the city’s integrated high school.

Lehman spoke with a classmate of Charles’ at Douglass, Carolyn Carter-Howard, who called him a “genuine guy.”

“She attended school with Michael from eighth through 11th grade,” Lehman said. “She recalls him as a fun-loving, good-humored classmate that people loved. She specifically remembers after an important Friday night football game in which Michael made a touchdown, that Monday he danced down the hallway at school.”

VCU student Kendall Sargent researched John Leonard Grimes, a 21-year-old interpreter for the 25th Infantry Division, who died in May 1970. Sargent interviewed Grimes’ brother-in-law, who told her that everyone called Grimes “Johnny” and recalled having a surprise encounter during the war while they were both deployed.

When Grimes died, his brother-in-law, who had been in Cambodia, received special permission to escort the remains home to their family.

“He said that that was, to this day, 50 years later, the most difficult thing he's ever had to do,” Sargent said.

Raymond, who researched Robert Lewis King, a U.S. Army staff sergeant from South Hill, Virginia, who died in April 1971 in Da Nang after contracting a high fever, found details on his life from sources that included military records and the local newspaper, the South Hill Enterprise, which provided details on deployed local military men and women in the column “With the Servicemen.”

The project, Raymond said, helps the Virginia War Memorial by finding the personal stories of the service members who lost their lives. But it also helps the students, she said, providing them with valuable historical research experience and an opportunity to contribute to our understanding of the war and its impact.

“For one thing, after a semester’s worth of reading, it’s nice to get out of a book and into real life and think about individual people to personalize the impact of Vietnam, and especially on Virginians,” Raymond said. “And it also gives us the opportunity to contribute to public history in our community. For those [students] who go on and want to do public history work or museum work, they might one day do something similar with their own projects, working with volunteers or classes to help with research.

“For my own part, after seeing this effort succeed so well with graduate students, I plan to implement a similar assignment in one of my undergraduate courses next semester. There are plenty of names left to research.”