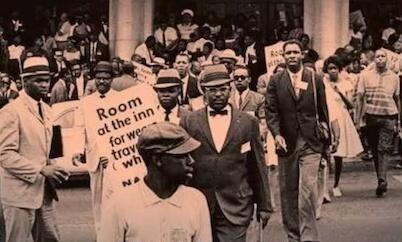 ‘Heart of Atlanta’: Alum’s book tells the story behind the first legal challenges to the Civil Rights Act

In “Heart of Atlanta: Five Black Pastors and the Supreme Court Victory for Integration,” Virginia Commonwealth University alum Ronnie Greene tells the story behind the U.S. Supreme Court’s landmark decision in the 1964 case Heart of Atlanta Motel Inc. v. United States, which held that the government could forbid private businesses from discriminating on the basis of race under the commerce clause.

The book, published this month by Chicago Review Press, explains how two avowed segregationists refused to integrate their establishments — the Pickrick Restaurant and the Heart of Atlanta Motel — in defiance of the just-passed Civil Rights Act of 1964. To challenge them, Black ministry students showed up to eat at the restaurant and Black pastors booked rooms at the motel. The resulting confrontations became the centerpiece of the first two legal challenges to the Civil Rights Act.

Greene, who received a journalism degree in 1986 from what is now the Richard T. Robertson School of Media and Culture in the College of Humanities and Sciences, as well as a master’s degree in nonfiction writing from Johns Hopkins University, is an investigative journalist and author who has been the Washington enterprise editor for Reuters since 2016. Before joining Reuters, Greene edited a 2014 Pulitzer Prize-winning investigation for the Center for Public Integrity, and also was a recipient of the IRE Medal, an Emmy Award, and the Harvard Goldsmith Prize for Investigative Reporting.

“Heart of Atlanta” is Greene’s third book, having previously authored “Shots on the Bridge: Police Violence and Cover-Up in the Wake of Katrina” (2015) and “Night Fire: Big Oil, Poison Air, and Margie Richard's Fight to Save Her Town” (2009).

What inspired you to tell the story behind Heart of Atlanta Motel Inc. v. United States?

I’ve always been attracted to stories of justice and injustice, and particularly those involving issues of civil rights. I found this story in a roundabout way: Several years ago, I watched a compelling movie, “Loving,” about a U.S. Supreme Court case involving interracial marriage. As I left the theater, I thought: I wish I had written that book about the Loving case. That thought then sent me on a quest to find a Supreme Court civil rights ruling that, perhaps, had been forgotten to history. I found Heart of Atlanta.

In what ways do you think this story of Black pastors and ministry students taking a stand against segregation will resonate today?

The racial struggles of the 1960s echo today. As I was reporting this book, George Floyd was murdered by police in Minneapolis and cities across the nation took to the streets in protest. Days after his death, I reached out to interview one of the ministers involved in the civil rights engagement in Atlanta in 1964. Before I could start, the minister, Albert Sampson, said: “Why am I in tears all the way in Chicago? This one here is making me cry because we’re in 2020.” Other echoes abounded. The March on Washington of 1963 was repeated nearly six decades later in the Washington summer. The fight for civil rights remains fully engaged 58 years after the segregation battle of 1964.

What did your research process entail?

The research was a mix of archived documents, video files and oral histories. The archived documents included the entire case files for the two legal cases at the core of this book — one involved the Heart of Atlanta Motel, and the other the Pickrick Restaurant. The files I obtained included transcripts of court hearings in the 1960s, so I could recreate, verbatim, what the parties were saying at the time. I reviewed scores of other documents, such as Justice Department reports on the civil rights murders of the day, and videos of key political events in the 1960s. I fleshed out those documents with multiple interviews, including with the two surviving ministers who were involved in the legal cases and the widow of the lead plaintiff. Their oral histories enriched this saga.

What do you hope readers take away from "Heart of Atlanta"?

There are hundreds, or thousands, of unsung heroes of the civil rights movement. Meet five here.

I was moved by the bravery of the ministers who helped break the color barrier in Atlanta. When they sought a seat at the whites-only Pickrick Restaurant run by a future Georgia governor, the proprietor greeted them with a handgun and sold ax handles to his customers. The ministers, disciples of Martin Luther King Jr.’s preaching of nonviolence, did not fight back as they were surrounded by swarms blocking their entrance. But they didn’t retreat: They kept coming back, again and again, risking their lives to make clear that everyone deserves a seat at the table.