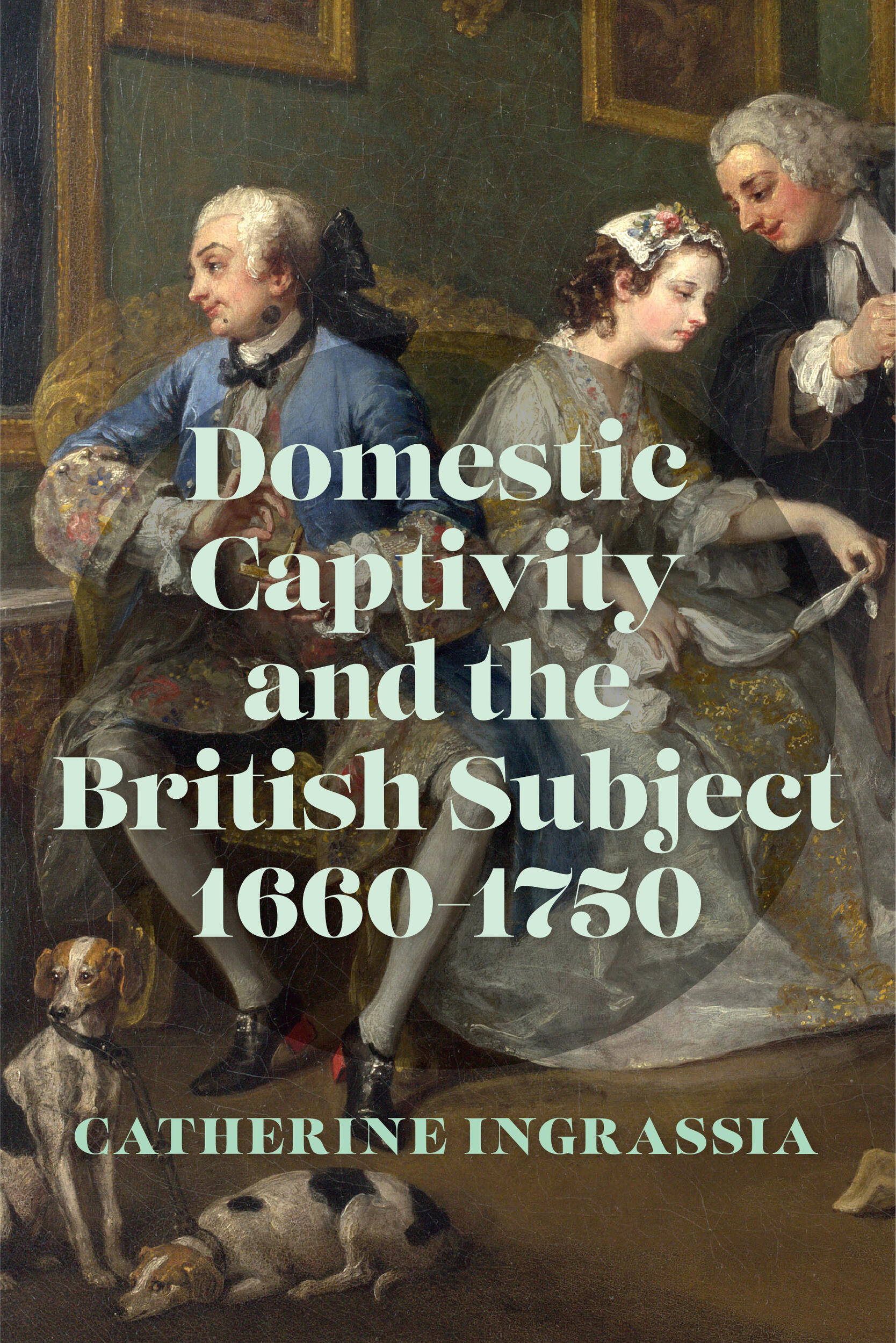 Catherine Ingrassia, a VCU English professor, is the author of ‘Domestic Captivity and the British Subject, 1660-1750.’

In the 17th and 18th century, British subjects’ understanding of captivity was rooted in what they experienced in their daily lives, from “domestic captivity” as part of marriage to captivity rooted in practices far more sinister – slavery and Great Britain’s involvement in the trans-Atlantic slave trade.

Yet, when Virginia Commonwealth University professor Catherine Ingrassia, Ph.D., began exploring scholars’ work on British literature of the time, she noticed that many dismissed references to captivity as metaphorical when, in fact, the presence of captivity in British life was very real.

“The condition of captivity, like the British involvement in the trade of enslaved people, was so naturalized and normalized and so widespread as to be unremarkable in literary texts. Yet, when we look closely, we see the codes for and language of captivity everywhere,” said Ingrassia, who will become interim dean of VCU’s College of Humanities and Sciences on July 1. “Once we read for the codes and language of captivity, we see a very different picture of England at this time.”

This new perspective on British life — and its meaning today — is the focus of “Domestic Captivity and the British Subject, 1660-1750” (University of Virginia Press), a book by Ingrassia, a professor and chair of VCU’s Department of English, being released this month.

“Even though my book focuses on events that happened before 1750, the inequities and power asymmetries along the lines of race and gender are still very much in evidence, both here and in other parts of the world,” Ingrassia said. “It seems like a narrative from a distant past, but we are very much the heirs of the 18th century.”

Ingrassia spoke with VCU News — and with VCU’s Humanities Research Center — about the book, what examples of captivity exist in British literature and how a new understanding of this time period in Britain can change perspectives on history today.

What sparked your interest in exploring the domestic captivity of women in 17th- and 18th-century Britain?

As someone who has worked extensively on women writers of the period, I was keenly aware of the legal restrictions on women in the 18th century and the way women writers responded to that. British law of the time dictated that, once married, women were legally “covered” by their husbands. A woman essentially had no legal existence, could not own property separately — it all belonged to her husband — and, of course, could not sue for divorce. It literally took an act of Parliament to get divorced. Additionally, marital rape was not recognized and did not exist legally in England until 1980.

These restrictions within marriage existed simultaneously within a culture in which women had few options for financial support except to marry. While professional women writers were emerging, women could appear on the stage, and women were often integral partners within family businesses, but few to no paths for financial independence existed for most women. Additionally, the social limitations governing women’s behavior  — the expectations for obedience, resistance to women’s education, prohibitions against premarital sexual activity — were also deeply constricting and limited options for women.

Within that context, then, it is not surprising that writers — men and women — commonly used imagery of captivity to describe marriage and other aspects of their life. Similarly, women working as laborers in domestic service or agricultural work, for example, also characterized their situation as one of captivity.

I was interested in the paradox between a country that proclaimed itself to be a place of “liberty” while simultaneously disenfranchising and actively oppressing women, many of whom were keenly aware of the contradiction and hypocrisy.

Your book talks about the concept of domestic captivity as “inextricably connected to England’s systematic enslavement of kidnapped Africans and the wealth accumulation realized from those actions, even as early fictional narratives suppressed or ignored the experience of the enslaved.” How did domestic captivity among British women relate to slavery?

The book explores a world in which humans — men, women, Black, white — could be considered a form of property. When England actively engaged in the trade of enslaved people — and it’s important to remember that the British crown had monopoly rights to the trade in enslaved people through the Royal African Company until the early 18th century — that practice, coupled with the legislation around it, created what one scholar describes as the moment “human beings become ‘real chattels.’” That characterization extended to a wide swath of British subjects, particularly the poor or other dispossessed individuals, in addition to enslaved Africans. This period also saw the rise of indentured servitude, voluntary and involuntary, as a form of unfree labor. Individuals convicted of theft or other petty crimes could be sent to the West Indies or colonial America to labor for seven years.

These practices created what I term a “culture of captivity,” a situation to which people were very attuned. Accordingly, many women writers of the period drew on the language of the enslavement, confinement and restriction they saw all around them to characterize their own situation.

As I discussed in my Meet the Author book talk with VCU’s Humanities Research Center, the enslavement of kidnapped Africans and the domestic captivity were obviously very different conditions. Those I discuss as “domestic captives” did not occupy the permanent and inheritable status of people who endured a system of racially based enslavement. To use the term “captivity” in connection with the confinement of British subjects is in no way to equate their captive condition to the bondage of enslaved Africans in a colonial site. The captivity of Britons was a contingent not a perpetual state, a temporary not inheritable condition. That difference is vast and crucial to keep at the forefront of any discussion. Nevertheless, these were mutually enabling and mutually reinforcing cultural practices.

What are the implications of this connection — and of domestic captivity on the whole — in changing our understanding of the world as it was in 1600s-1700s Britain? How will this have the potential to change how such history is taught today?

Reading with a lens of captivity can change the way we think about the period in a couple of ways. We can recognize the presence of enslaved people in England and in British colonies and the tremendous economic effect of the trade in enslaved people on British culture. We see how the threat of imprisonment or indentured servitude shaped the lives of people living in England who understood the situation. And we necessarily complicate how we understand how the position of women — or frankly, anyone other than a land-owning white male — could, often suddenly and arbitrarily, find themselves confined, restrained or held captive in some way.

What were some examples you encountered of authors exploring domestic captivity in the literary works you studied?

So, one thing that became apparent quickly was that canonical texts of the period that people are familiar with — “Robinson Crusoe” or “Gulliver’s Travels,” for example — are predicated on the title characters’ participation in the trade of enslaved humans. Few people think about that or consider the implications of that participation. Similarly, other canonical novels regularly taught from the period have casual references to enslaved humans that have gone undiscussed. The most popular novel of the 18th century, Samuel Richardson’s “Pamela,” has a description of “a little [African] boy, of about 10 years old, [given] as a present,” a gesture that naturalizes the commodification of enslaved people —  and the gifting of humans as though only property devoid of humanity. Even Jane Austen’s “Pride and Prejudice” has an oblique but searing reference to the brutality enacted on the bodies of enslaved humans.

Another thing I discovered when working with the about 350 manuscript letters of a female poet, Judith Madan, and her husband, who was both a military officer and a plantation owner, was how fully integrated discussions of the treatment of enslaved people on his plantation was with both their expressions of personal affection and mundane details of their domestic lives. It was really chilling.

Also, once I realized that the author of one of the most popular plays of the 18th century, Richard Steele, had inherited a sugar plantation and the enslaved Africans on that plantation from his first wife, it cast a completely different light on the ways his plays and essays dealt with captivity and enslavement — again, in ways that were largely overlooked.

What takeaways do you hope readers will gain from your book?

I hope readers will reconsider the discrepancy between the “liberty” so central to British construction of national identity and its limited meaning in the actual lives of British subjects — the unprotected child, the impressed sailor, the indigent laborer, the indentured servant or the married woman.