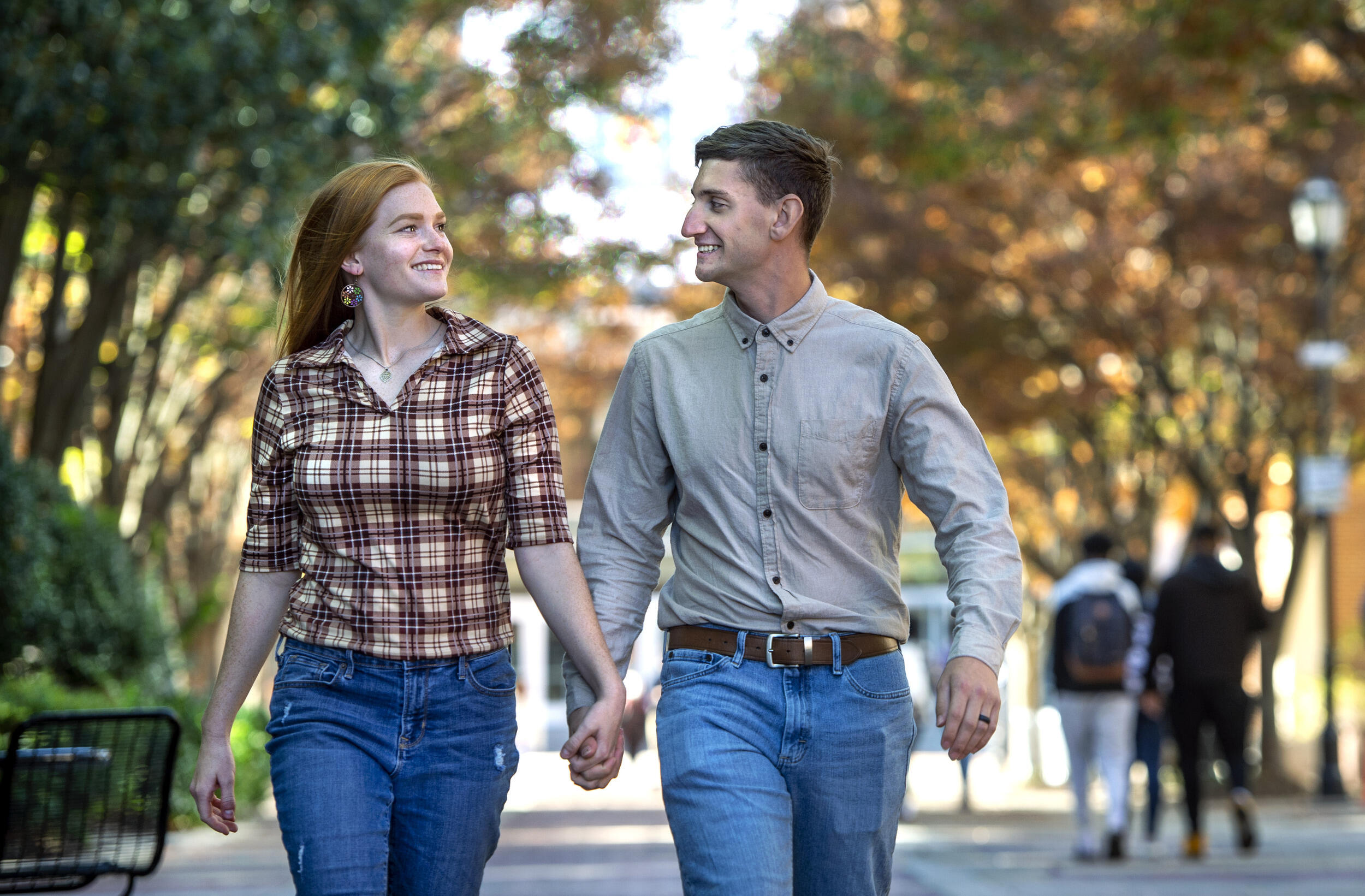 The couple, who are enjoying VCU’s urban setting, plan to return to the Army after earning their bachelor’s degrees.

Corinne Rapp and Joe Cambria, who are both U.S. Army veterans, enrolled this fall at VCU as part of the Army Green to Gold Active Duty Option program. (Kevin Morley, University Marketing)

Virginia Commonwealth University juniors Corinne Rapp and Joe Cambria call it kismet that they were stationed at the same U. S. Army base in Germany when they first met via the dating app Tinder.

Both had been transferred to U.S. Army Garrison Bavaria in Grafenwöhr, Germany from two separate Army bases in Germany. When they met in 2019, Cambria had only been on the base for a month. Rapp had been there for a year.

“It was love at first sight,” said Rapp of their meeting. “We went on our first date to a hookah bar. Joe was adorable and awkward.”

“She seemed like she had a good personality,” he said.

The date went well, and the two spent most of their time together after that.

“We were hanging out daily, during lunch break and after work,” said Rapp, a native of Bradenton, Florida.

They took advantage of their time in Germany by traveling to different countries on their four-day weekends.

“We went to Spain, Switzerland, Ireland, Croatia, Greece, Italy, Paris and Poland,” said Cambria, who is from Bremo Bluff, Virginia. “My favorite was Greece. We had a romantic dinner where we had a really nice view of the Acropolis and Athens.”

The couple got engaged in Dresden, Germany, on Thanksgiving in 2020, and they were married that December.

“We walked along the river and he proposed there,” Rapp said. “There were Christmas lights all around. It was so pretty.”

Tapping into the Army Green to Gold program

The couple returned to the U.S. in August this year after enrolling in the Army Green to Gold Active Duty Option program, a two-year program that provides eligible, active duty enlisted soldiers an opportunity to complete a baccalaureate degree or a two-year graduate degree and earn a commission as an Army officer.

Previously, Rapp was a staff sergeant and Cambria was a sergeant. Each was honorably discharged from the Army at the beginning of August. They will commission back to the Army in 2024 after completing their degrees.

They opted to come to VCU to start the fall semester because of the ROTC program. They had consulted with Tony Chau, recruiting operations officer for the Department of Military Science and Leadership for the University of Richmond Battalion, which also serves VCU, Virginia Union University, Randolph Macon, Longwood and Hampden Sydney.

“Mr. Chau was very knowledgeable and responsive,” Rapp said. “We drove around to check out the different colleges, and I really liked the way VCU is set up. I like the fact that it’s integrated in the city.”

Both Rapp and Cambria are pursuing bachelor’s degrees in interdisciplinary studies in business and communications in University College. They both enrolled at VCU as juniors because they had completed their freshman and sophomore credits through an online college in Germany.

“We believe that what we are learning in management, leadership, communication and organization will be helpful to us as commissioned officers,” Rapp said. “It will help us be good leaders and commanders in our unit.”

They are enjoying their time at VCU.

“The professors are really good and we’re doing a little bit of volunteering with Military Student Services and the ROTC program,” Rapp said.

Both also enjoy being in the Army and will return to the military after they graduate from VCU.

“You are part of a community. Everyone is going through the same experiences and can relate to one another on that level,” Rapp said of the Army.

“We’ve met a lot of people in the Army that have become really good friends,” Cambria said. “VCU is similar to the Army in the aspect of making new friends. It provides an opportunity to learn and meet new people who could become lifelong friends.”