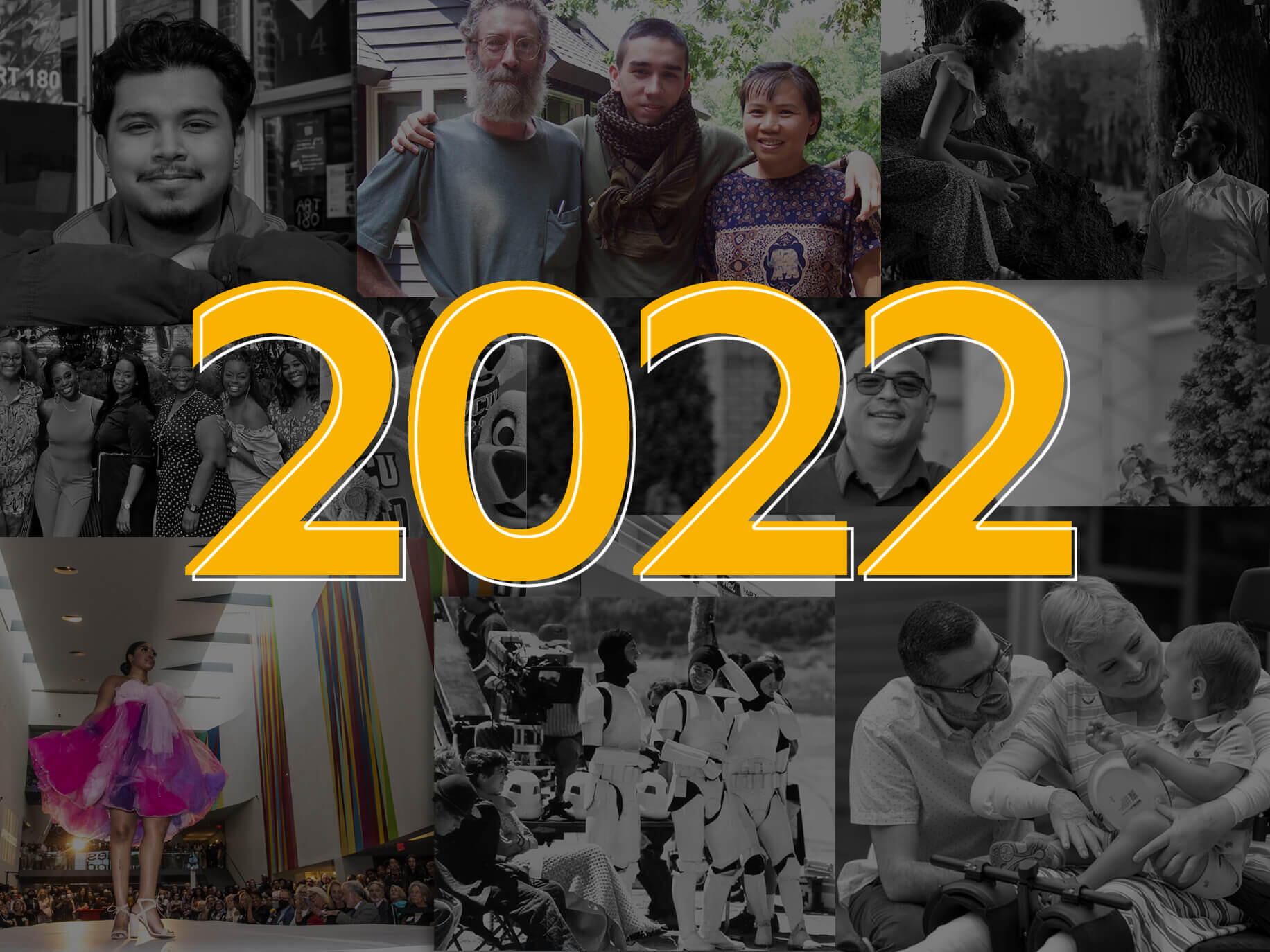 A record-breaking grant for liver research. An alum starring in a Tyler Perry film. Building a car engine out of Lego. Here are the VCU News stories of the year.

As we begin a new year, VCU News took time to reflect on the year that passed – and some of the stories that made it so memorable. Here are some of the most compelling stories that filled our calendar in 2022.

As 19th century ancestral remains arrive at VCU, researchers aim to learn more about who they were

At the start of the year, the 19th-century human remains discovered in 1994 in an abandoned well on the MCV Campus were transferred in January from the Virginia Department of Historic Resources to the Department of Forensic Science in the College of Humanities and Sciences at VCU, where researchers are seeking to understand more about who the people were and the cultural and historical context in which they lived.

In February, VCU announced a historic $104 million gift that supports VCU’s new Stravitz-Sanyal Institute for Liver Disease and Metabolic Health in its efforts to stop, prevent and reverse liver disease. VCU will radically expand treatment options for liver and liver-related metabolic diseases thanks to the gift from R. Todd Stravitz, M.D., and his family’s Barbara Brunckhorst Foundation. This gift is the largest in VCU’s history, the second-largest publicly shared gift to a university in Virginia and the largest publicly shared gift to support liver research in U.S. history.

A student in the College of Engineering, Linn had planned on returning to VCU after his tour of duty for the U.S. Marines in Iraq, but unfortunately he never made it back. Linn was killed during an ambush in 2005. This article shared mementos and memories of his family and friends that paint a picture of his remarkable – though short – life.

Faculty experts weigh in on the big topics of the moment

Throughout the year, our faculty shared their insights on a variety of compelling issues. For instance, early in Russia’s invasion of Ukraine, Judyth Twigg, a professor in the Department of Political Science, analyzed the implications of Russia’s actions. In March, George Hoffer, a professor emeritus, explained why it is so difficult to buy a car. Four professors discussed the importance and impact of Title IX in June when the landmark civil rights law turned 50. That same month professors explored the potential impact of Dobbs v. Jackson, the Supreme Court ruling overturning the right to an abortion. A Q&A with William Pelfrey, a professor in the Wilder School of Government and Public Affairs, about why school shootings keep happening in the United States was the most-viewed article of the year on VCU News. Historian Brooke Newman reflected on the reign of Queen Elizabeth II after her death in September. And, in November, Grace Gipson, assistant professor in the Department of African American Studies, detailed how the “Black Panther” film helped to change Hollywood and discussed the importance of representation in pop culture.

The University Student Commons is like VCU’s living room — a comfortable space for get-togethers of many kinds, formal and informal. Take a look inside the facility that has been bringing thousands of members of the VCU community together since it opened in 1984.

From refugee to Ph.D.

Driven by a thirst for knowledge, doctoral student Nathan Tuoch draws strength and resilience from his family’s story of survival.

Communication arts major Geovanny Mejia has been immersing himself in the city’s arts scene since high school, when he started participating in programs at the nonprofit youth organization Art 180. In a story and accompanying video, Mejia talked about the city’s welcoming artist community and gave some tips for things to do around Richmond.

Whatever it is that makes them so special, some classes stay with you long after the semester ends, perhaps even for the rest of your life. VCU News talked with four students about that one class that moved them in ways both big and small toward the person they are today.

On a night of celebration and camaraderie, the School of the Arts Department of Fashion Design + Merchandising held its first in-person fashion event since 2019. The fashion show, #PROCESS2022, showcased the hard work, talent and creativity of the department’s students.

A graduation to remember

Photographers were there to capture scenes from a host of events surrounding VCU’s May commencement – including the big event itself.

The year saw VCU researchers break new ground with vital research on a wide range of issues. A sample of 2022’s revelatory new research results includes how the presence of negligent landlords can predict violence in Richmond neighborhoods; a look at whether vaping can cause you to fail a sobriety test; news that U.S. life expectancy continued to fall in 2021; how a new stable, magnetic superatom could power innovations in nanomaterials; why making sure workers have a good day gives companies a competitive advantage; a new study using brain imaging that helps explain why humans are aggressive toward rival groups; and news that evangelical Christians were less likely to get COVID-19 vaccine after conversations with their faith leaders.

For VCU alum and 25,000 others using her platform, meaningful connections start with brunch

Melissa Mason’s business, Brown Skin Brunchin’, has helped thousands of minority women connect, personally and professionally, in 71 cities across three countries. In this profile, she explained how it all began with a friendship forged on an elementary school playground.

A long time ago in a galaxy not so far away …

As Disney+ prepared to debut “Light & Magic” — a docuseries detailing the history of ILM — two VCU professors reflected on their own time at the company and the skills they developed that they now share with their students in the visual effects minor.

Scenes from Footprints on the James

This summer, a dozen VCU students and one Reynolds Community College student spent five adventure-filled weeks traversing the James River via kayaks, batteau, canoes and rafts from Alleghany County to Jamestown. Taking part in the experiential Footprints on the James course, the students learned about and gained an appreciation for the river’s natural history and biodiversity, its role in Virginia’s development and how its historic and modern-day use impacts its quality, flora and fauna.

What’s it like being VCU’s fierce and lovable mascot? Four Rodneys spanning 1982 to today shared their memorable experiences inside the costume – from rappelling off a tall building to confronting an opposing mascot in the heat of a big game.

The start of the spring semester also brought with it the rollout of a new brand for the university — Uncommon VCU — and students paused to have their photos taken, choose a T-shirt and talk about what makes VCU a place unlike any other.

Through a series of profiles of dozens of outstanding students, we celebrated our newest class of graduates in both May and December and examined the indelible mark they made on VCU.

The VCUarts alum plays Bayou, a singer in the 1940s, in a part that Perry originally wrote for himself 25 years ago. Boone has seemed destined for stardom since he first auditioned for a part in a TheatreVCU production as a student.

“He walked into the room, and that was it,” said Patti D’Beck, former director and choreographer at the VCU Department of Theatre. “He lit up the room. And we all went, ‘Wow, who is this person?’”

The stirring story of Charlie Anne Xavier, who suffered third-degree burns over 85% of her body following a horrific workplace accident, highlighted how the wide-ranging skills and expertise from VCU Health medical staff can come together in just the right way to take on the most challenging cases and do the seemingly impossible. After more than 170 days at VCU Health’s Evans-Haynes Burn Center, Xavier, who suffered some of the worst burns her doctors had seen, returned home to her husband and their two young boys.

This story took an in-depth look at a student organization and a course for first-year students that are part of a larger Men of Color Initiative at VCU that seeks to improve enrollment, student success and postgraduation outcomes for Black and Latino men using innovative approaches grounded in data and research.

How I turned it around

While each student has a unique experience, many issues they tackle are universal. Time management, difficult classes, and mental and physical health struggles are among the most frequent challenges students face. In this series, students shared their stories of facing daunting challenges – and ultimately overcoming them.

How saying ‘Yes, and …’ is helping veterans who are experiencing homelessness

A project developed by Elizabeth Byland, head of improv with the VCU School of the Arts Department of Theatre and director of applied health improv with the Center for Interprofessional Education and Collaborative Care, implements improv techniques both to strengthen self-advocacy and problem-solving skills among people experiencing homelessness and to reduce the stigma of homelessness among health care practitioners. Classes at Liberation Veteran Services, which provides transitional housing for veterans, grew into a weekly meeting for veterans and health care students.

This semester senior mechanical engineering student Noah Armistead was on a mission to build an exact replica of the 8-cylinder engine found in a Ferrari 158. The only difference? His is made entirely of Lego.

Tom De Haven, who wrote a series of novels centered around comics and cartoonists and taught creative writing in the Department of English at VCU’s College of Humanities and Sciences, appeared as himself in the “Dick Tracy” comic strip that inspired his fascination with the field.

VCU kept earning headlines in 2022 for its far-reaching impact. A report in June showed that VCU generates $9.5 billion in economic activity in Virginia, and the university announced in September that it had set a new record for sponsored research funding, reaching $400 million for fiscal year 2022 – a 47% increase over five years ago. It’s little wonder that this fall VCU was named one of the 30 most innovative public universities in the country by U.S. News & World Report and earned a places in the publication’s ranking of the best global universities. Finally, at the end of the calendar year, VCU reached a new milestone when it broke into the National Science Foundation’s top 50 public research universities based on fiscal research expenditures.